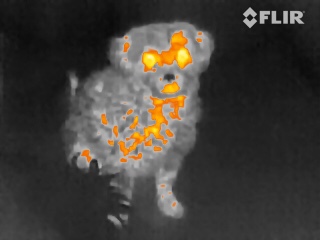 Thermal imaging has been around for quite some time, but until recently, it has been unaffordable for most people.
We were lucky enough to run across a deal and were able to purchase one of these amazing units.
It is a FLIR TK Scout, and is a monocular style of thermal scope.
It has a camera and video mode to capture small resolution photos and short video clips.
There are a range of various color modes in which to view the heat profiles of objects.
As a photographer, it is the light that we chase, so it took some time to get used to looking for the heat.
Even though it looks dark in the image above, there was plenty of light when it was taken.
A dog's nose is always cold - hence the very black nose - no heat is being emitted from it.
Her eyes and face certainly loose heat as well as her chest.
The hair on her back holds in her heat more than I thought it would as Yorkiepoos tend to be colder since they don't have fur. 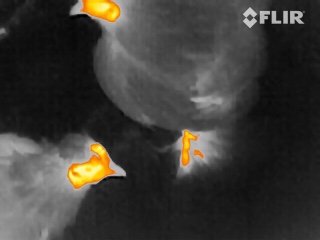 The chickens are really a lot more insulated than I thought they were as well.
Just their faces and feet loose heat.
The feathers do a spectacular job of keeping them warm - which is especially needed when the temps fall into the single digits.
We have skylights in our kitchen and it was surprising to see them from the outside through this scope.
We purchased this unit to bring along with us on hikes and travels so we could "see" what our eyes might be missing.
Technology gives us some added security in the woods and wherever else we may be.
Posted by KML at 9:56 PM